The Fast Moving Consumer Goods (FMCG) is those goods, which are normally consumed by the consumers at a regular intervals. FMCG industry primarily deals with the production, distribution and marketing of consumer packaged goods. FMCG products usually have a shelf life, either as a result of high consumer demand or because the product deteriorates rapidly. Some FMCG products—such as meat, fruits and vegetables, dairy products, and baked goods—are highly perishable. Other goods such as alcohol, toiletries, pre-packaged foods, soft drinks, and cleaning products have high turnover rates. FMCG is probably the most classic case of low margin and high volume business.

Products belonging to the FMCG segment generally have the following characteristics:

WHAT TYPE OF RETAILERS ARE IN THE UK?

WHAT SHARE OF MARKET DOES EACH OF RETAILERS HAVE? 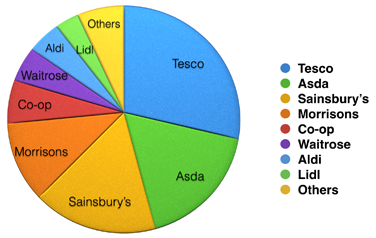 IS THE UK MARKET DIFFERENT?

Most suppliers would agree the UK Market is very different to other markets. It is highly competitive, multiple grocers apply a lot of sophistication and category tools when ranging their fixtures which means it can be very difficult to gain listings without the right approach, then also maintaining the listings as the retailers expect quick success as ranges are regularly benchmarked for filtering out products that are not performing.

While total retail sales in main Stream Grocery are getting close to 80% of the trade (Excludes on trade data), some channels clearly over perform in particular categories such as confectionary (being such an impulse purchase).

Three major changes we have seen this decade are the rise of the multiple retail convenience stores, the rise of the pound stores located mainly on the high street and finally the growth in discounters Aldi and Lidl. This last trend has had a dramatic effect on the top 4 retailers and is changing the way they do business.

HOW SHOULD YOU APPROCH THE UK MARKET?

With a clear objective and a detailed plan on how to achieve this plan, based on very realistic assumptions. The UK market is reputed to be the toughest in the world, however get it right and the rewards are strong. So whether you are large or small, you have big plans or small plans get help! Ensure you have a solid well thought through plan, your consumer offering is good and you have researched UK consumer’s reaction to your product. You need a compelling consumer rationale, trade rationale why should the supermarkets believe in your product or plan and stock it, and a brand plan that will deliver success in the eyes of the UK trade and consumer. This is where we would strongly recommend getting UK help from a company like Premier Partners that can help you build this plan, refine it, strengthen it and get it ready, not only to approach UK retailers but also UK distributors. If you want the best distributor for your brand (including ourselves), you need to convince them you have a plan and package that is worthy of their efforts. Dependant on your plans and resources you can either approach the market directly or via a distributor, the latter is the route most companies take. Some then transition later once the business grows to a certain size to their own sales force and manage their brand themselves. There are many logistics providers in the UK that can assist with the direct approach, as there are also many distributors from very small to very large who can manage your brand. It is also recommended to have a UK representative to work with your chosen distributor very closely as gaining focus in the distributor is key to success. Remember: NO ONE CAN SELL YOUR BRAND LIKE YOU CAN!